To see what life is like in Roxby Downs, please watch this video - https://www.youtube.com/watch?v=YJAJp0peEhI

Roxby Downs is a mining town in outback South Australia, 563 kilometres north of the state capital Adelaide. The town has a transient population of around 4,500 people with a large percentage of young people.

Roxby Downs is often referred to as the most 'modern town of the outback'[and it has many leisure and community facilities including aquatic, cinema, cultural precinct, community radio, shopping centre, schools, TAFE, cafes and sporting clubs and facilities. There are just two neighbouring towns in the area: Andamooka, an opal mining town about 30km to the east, and Woomera, 84km south of Roxby Downs.

Roxby Downs offers a relaxed and family oriented lifestyle. Given the facilities, services, and opportunities available, it is Australia’s most highly regarded mining town. 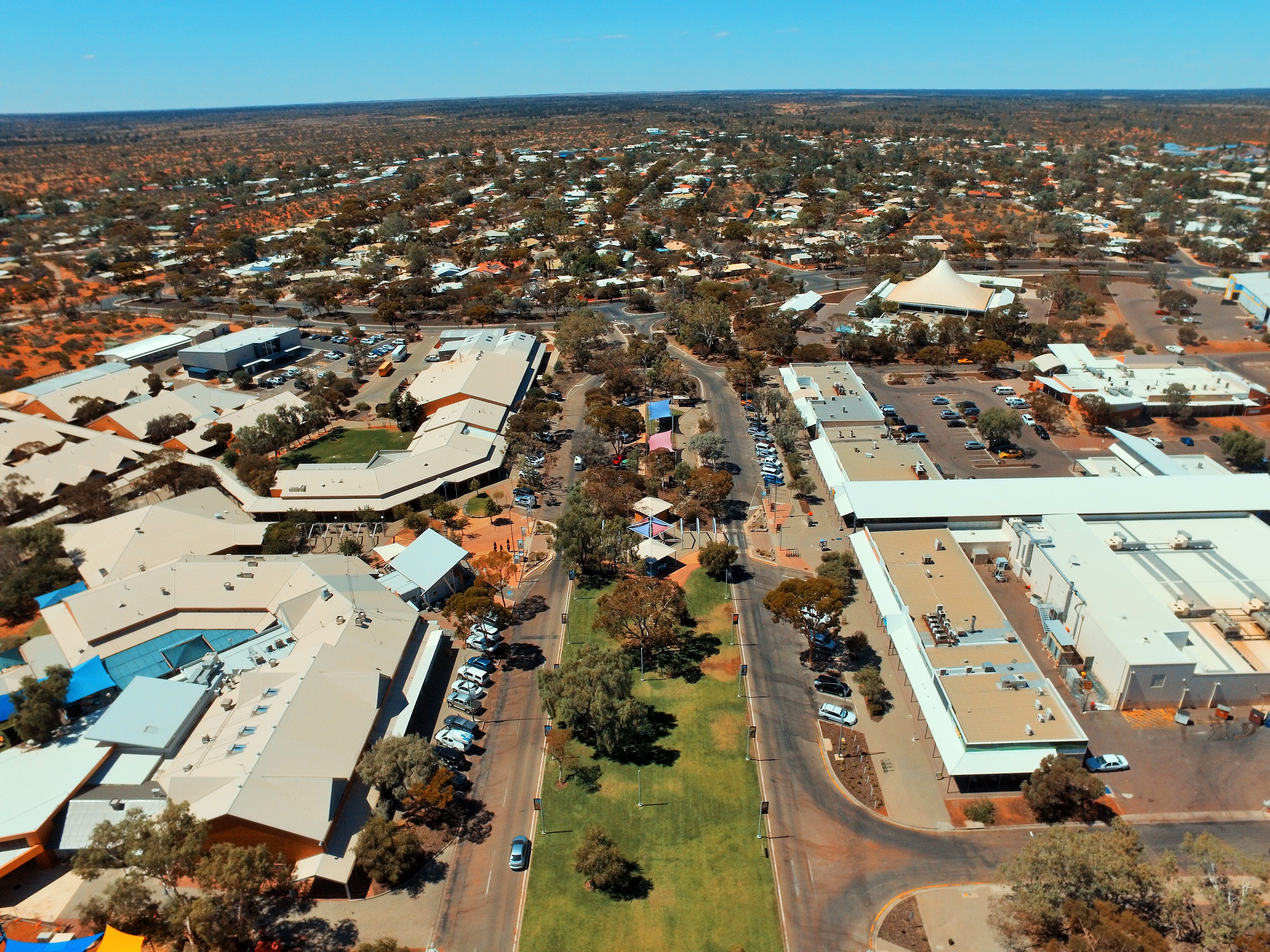 Roxby Downs sits like a modern oasis in the middle of the desert. The town is situated on a sloping plain to the south of the mine, surrounded by the red dirt of the desert, and framed by blue skies. It is also well known for its stunning sunsets. It is a vibrant and modern town that has been described by locals as the “gateway to the outback”. For international tourists, the Aussie experience hits an all-time high with kangaroos and emus known to walk the town’s streets. Visitors will also notice the relaxed feel of Roxby, as well as the great sense of community in the town.

Like most of inland South Australia, Roxby Downs has a desert climate, with little rainfall all year round. Roxby Downs is in one of the driest areas of the state. Summers are hot, with temperatures up to 45°C, while winters can be cold, particularly in the morning and at night, where temperatures can get to zero. No matter what, there’s always plenty of sunshine! 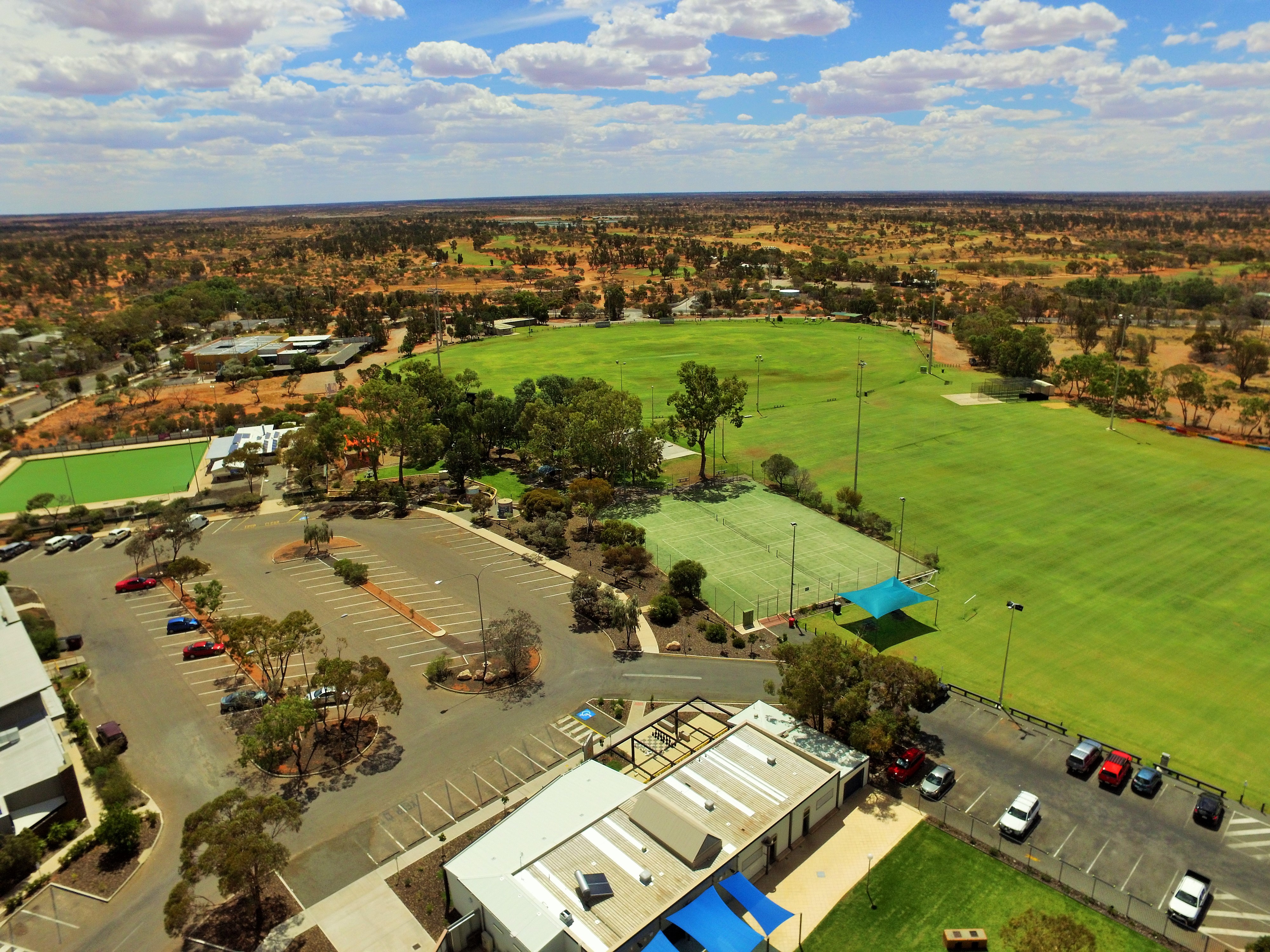 Roxby Downs is a tight-knit community with a friendly, country-town feel. Its remoteness and the transient nature of its FIFO workers brings this young population together. Like many regional towns, the lifeblood and social connection comes largely through sporting clubs.

In 2017, the Roxby Junior Sporting Academy (RJSA) was launched. The RJSA is a pilot program that gives talented young local athletes specialised training to help them reach the elite level.

Shopping and Other Pursuits

Shopping essentials are covered with a large supermarket, a newsagency, hardware store, bakery, hotel (and bottle shop), as well as cafes, restaurants, a community club, tavern, and takeaway options.

Roxby Downs has a number of cultural facilities, including a small art gallery and a Community Youth Centre. Public art is also on display in and around Richardson Place’s cultural precinct, including a sleepy lizard (gulda) sculpture, Sturt desert pea sculpture, community mural, multicultural quilt, and a time capsule installed in 2013 to celebrate Roxby Downs’ 25th birthday.

The town also has a war memorial. Each year there are local ANZAC Day and Remembrance Day services which sees hundreds of attendees pay their respects. 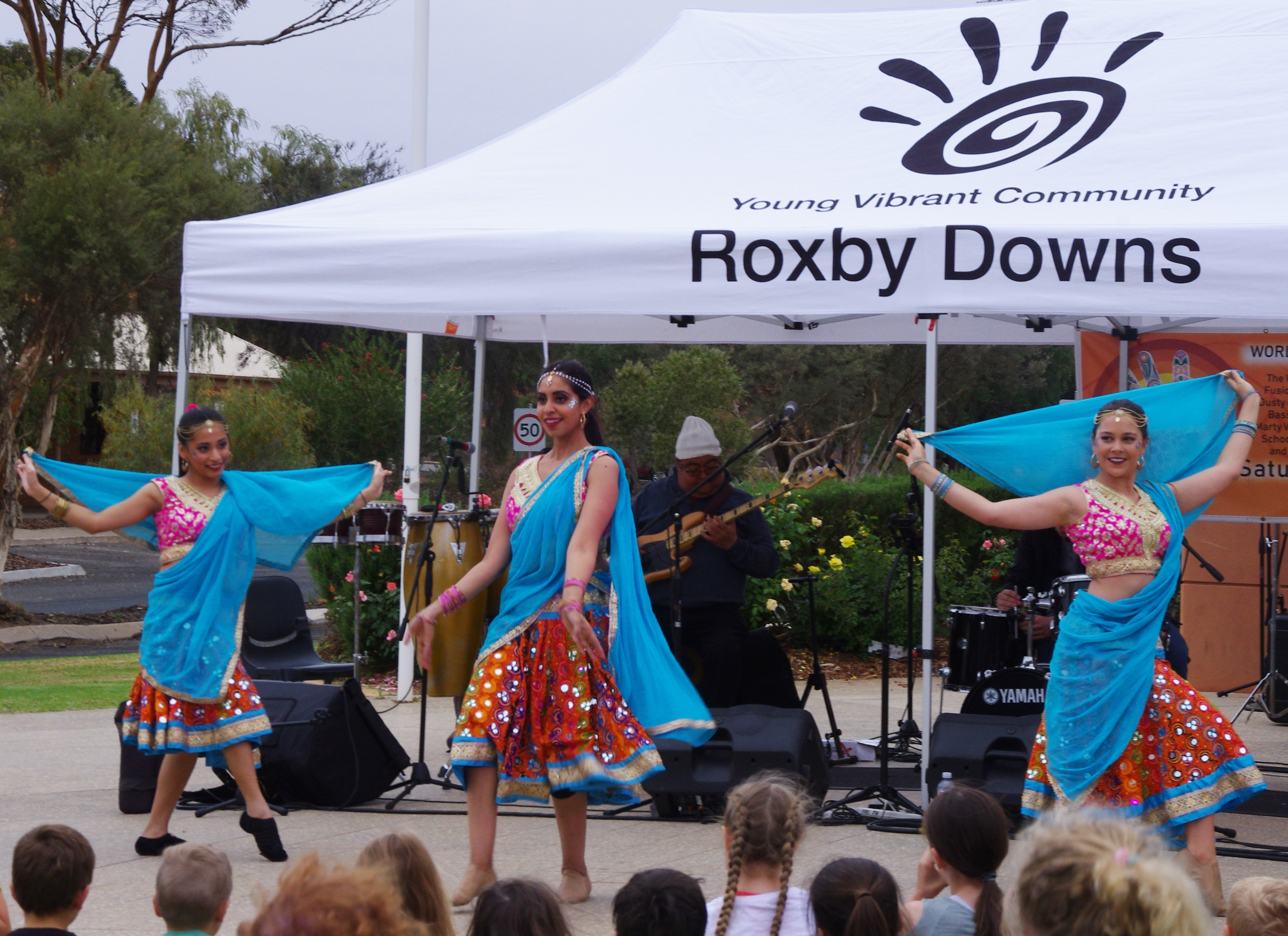 Roxby Downs Races  – The Roxby Downs Racing Club was formed in 1991 and held its first unregistered meet the following year. Officially titled the Outback Cup, the annual event held on the first Saturday in August features local, metropolitan and interstate races. A highlight of the day is the popular ‘Fashion on the Field’ competition. The Roxby Downs Races often attract jockeys from across the country and has well over 1,000 patrons.

Roxby Downs has a 24 hour community radio station called RoxFM. The station was established in 2003 and its music caters for the town’s demographic. RoxFM also has a number of locally presented programs. It is the only broadcast media produced in Roxby Downs transmitting to the township and surrounding areas.  ​

In 2019, Australian Community Media launched the 'Roxby Chronicle', a monthly newspaper that mainly features articles contributed by members of the community.

To accommodate for the high number of young families in town, Roxby Downs has two schools, one kindergarten, and two not-for-profit community based long day care centres. There is also a local TAFE campus.  Roxby Downs Area School, the largest in South Australia, is a public school catering for about 750 students in Years Reception to 12.

Roxby Downs is often referred to “as the perfect town for young families” with daily activities for children aged 0-5 years. Activities include story time at the Community Library, dance lessons, playgroups, Lego club, a Splashpad, swimming pools and neighbourhood parks and playgrounds.

The town has a 60 seat movie theatre and a newly built Youth Centre equipped with a community kitchen.

There are two schools and two child care centres. There are families with au pairs/nannies and also family day care options.

Roxby Downs provides a safe, sheltered environment for families to spend quality time together experiencing all that the Australian outback has to offer!

Check out our Youth Services page for things to do and how to book. 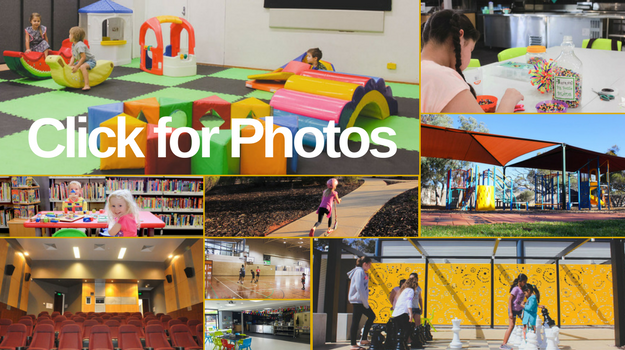 Roxby Downs is home to many Contractors, BHP Billiton employees and their families and those that provide services to the town. Minesite workers commute to the Olympic Dam mine site which is an easy 15 minute drive from Roxby Downs.

People work in the schools, childcares, at the various retail outlets, restaurants and pubs. There are plenty of opportunities for part time and casual work too.

Extended supermarket trading hours are convenient for working families as well as plenty of flexible recreation options for your “off” time. 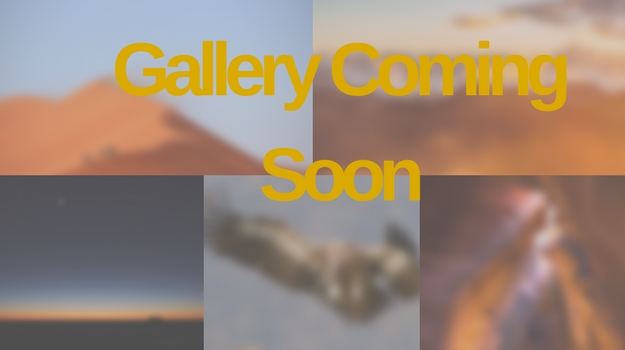 Roxby Downs is set against some of the most beautiful sweeping scenery in Australia. The red earth and the always-blue sky coupled with the stark Myall tree silhouettes is simply breath taking.

Residents are treated to stunning sunsets every evening, which get even better when there’s a fierce storm on the horizon.

The best way to appreciate the unique landscape is by hitting the footpath! Follow the Emu Trail and check out the view to the Olympic Dam mine site. Houses are snuggled amongst sand dunes but for the most part the streets of the town are similar to those in most other suburbs of Australia, however you may receive a visit from an unexpected guest; emus, snakes and monitor lizards are not uncommon! 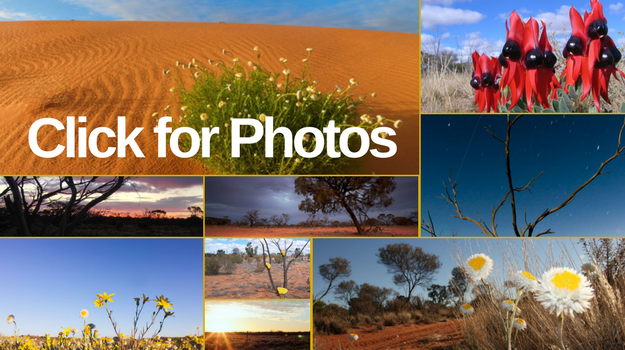 There is some amazing wildlife in and around Roxby Downs.

Access to reliable medical care is imperative in a town as remote as Roxby Downs. There are two doctors’ surgeries as well as the modern Roxby Downs Health Services hospital. A number of specialists regularly visit the town, including an optometrist, dentist, and gynaecologist, and there are several privately owned businesses offering services such as physiotherapy, podiatry and chiropractic, as well as a local pharmacy.

Roxby Downs has a modern police station in the town. The Port Augusta Magistrates Court sits in Roxby Downs bi-monthly to deal with local matters. The town has a low crime rate.

Community Board and Community Forums

The Roxby Downs Community Board is made up of representatives from the town, BHP Billiton and Roxby Council. The Board is a separate entity to Roxby Council but both parties work together to produce positive outcomes for the community. The Board acts as a lobbying body and aims to improve the quality of life for residents in Roxby Downs.

The local representatives on the Community Board are from the interest group subcommittees known as forums. Residents are strongly encouraged to join the various forums to participate in shaping Roxby Downs. There are a wide range of groups including Women’s Network, Sport & Recreation, Environment and Business. Joining a forum is easy and helps to connect like-minded people. 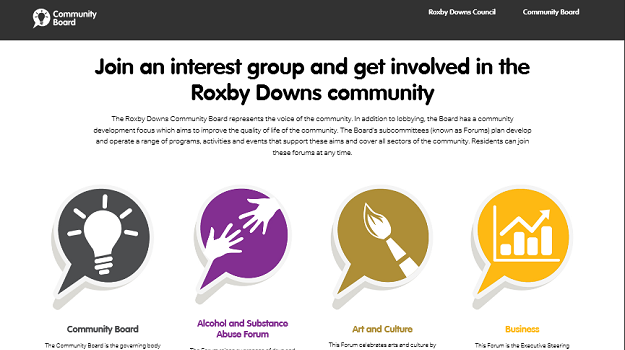